"Lean in" by Sheryl Sandberg 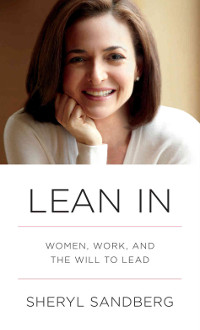 When I was a little girl I thought that the times when women were not equal to men are in the history.  I recently graduated from the university and I started looking for a job. The reason why a few employers did not hire me was "We don't want to hire a young woman because she will soon get pregnant and leave her job, we prefer to hire a man because with him we won't have such a problem." This is gender descrimination!

Sheryl Sandberg is the COO of Facebook. Her TED talk about the role of women in the society today became so polular that she wrote a book "Lean in". A nice portion of the book is dedicated to the woman's choice to become a housewife after giving birth and to leave her career. This of course is not an issue in the poor countries like Bulgaria where women have to go back to work to help support their families.

"Lean in" summons women not to be so quiet and agreeable and not to think of themselves as being  less valuable than men. Society today expects of a woman to get marry and give birth. It makes us believe that we can not achieve professional success because our role in life is to take care of our children and we start to lean out ourselves. Women in Bulgaria can vote since 1937. This is not too long ago like we like to think. One of the points in "Lean in" is that today women worry to call themselves feminists because they fear that men might stop liking them, but we still have battles to fight. Sheryl Sandberg writes about a lot of the limitations that societiy puts upon women but the main idea in this book is that women should support each other and shouldn't give up their dreams just because for them everything is much harder than it is for men.

I give four stars to "Lean in" just because a lot of the topics in the book were in Sheryl Sandberg TEDtalk. Another thing is that this books is mainly for women who work for corporations and there is nothing about women that have their own business.