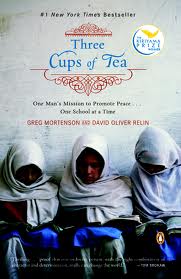 "Three cups of tea" tells the real story of Greg Mortenson. It is written by David Oliver Relin. Greg is an unprofessional alpinist, he makes an unsuccessful attempt to climb the second highest mountain peak K2. On his way back he gets lost while watching the beautiful snowy landscapes and he is saved and sheltered by the Balti people. Greg is deeply touched by their hospitality and the extreme poverty in which these people live. Mortenson promises himself that he will build a school for the local children living in this part of Pakistan.

After he gets back to America he starts raising money for his cause. Mortenson not only tries to get in contact with charity organizations and celebrities, he saves everything he could from his salary as a medical nurse and he lives in his car so he can save the rent for his cause. Greg gets the minimum amount of money he needs for the school from a rich charity man. Morgenson leaves for Pakistan where he faces a lot of difficulties to get what he wants. His story is really inspiring!

There is an edition of this book which is adapted for children. "Three cups of tea" has a sequal called "Stones into schools". Greg Mortenson builds a lot of schools for girls. His idea is that boys tend to move to the big cities and girls are the ones who stay in their native place and share their knowledge with their children.

"Three cups of tea" is full of interesting facts and information and you will definately not waste your time reading it!