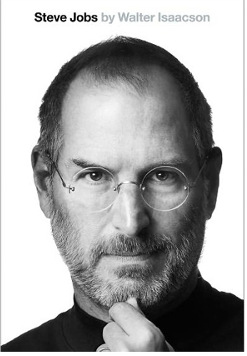 Steve Jobs' biography was released right after his death. To be honest I immediately thought that this was some sort of a marketing strategy so the book can be sold. It took quite some time before I decide to buy it. I liked this biography so much that I can see myself rereading it often. Steve Jobs is a really inspiring person. When you read this book you would wish to be like him despite the fact that he used to treat others terribly. Steve Jobs changed the world and everyone of us dream about doing that. He is one of Apple's co-founders, he changed the animation movies with Pixar, he created the iPod, the iPhone, the iPad, iTunes.
Steve Jobs asks Walter Isaacson to write his biography in the years he is fighting cancer. Isaacson is a famous author of biographies. Among the people he has written about are Albert Einstein, Benjamin Franklin, Henry Kissinger. To be honest I haven't read any of his other books but I definitely will. Sadly none of them is published in Bulgaria.
Steve Jobs is adopted, his adopted father is a automechanic, he is interested in electronics and design since he is a child. He spends only a year in college. At 20 he is interested in Buddhism, taking LSD, keeping strange extreme diets consisting only of eating fruits and he believes that because of his diet he does not need to shower. In high school Jobs meets Steve Wozniak who is a few years older and a son of a great engineer. One day the extremely talented Woz comes up with the idea of the first Apple computer. Jobs convinces him that they should found their own company. Jobs's parents garage becomes the first Apple workshop.
A few years after the company is founded Jobs is asked to leave Apple mainly because of his bad temper. Right after that he founds NEXT. Later he buys Pixar, a company that changes the animation movies with hits like "Toy Story", "Monsters Inc.", "Finding Nemo". Next is not such a beneficial project but it helps Jobs to return to Apple 10 years after he was forced to leave. The return of Jobs marks the beginning of a new era for Apple. Apple releases the iPod, the iPhone and the iPad. Steve Jobs changes the music industry with iTunes. Apple realizes the idea of cloud storage with iCloud.

My opinion is that this book is really worth it. You can learn a lot about the history of the computer from it. Everyone that I know who has read it can't stop quoting it. I find myself doing the same thing. A movie about Steve Jobs is on its way with Ashton Cutcher as Jobs. I hope that they do not ruin the book as they did with Beautiful Creatures.