What I read this month - January and February 2018 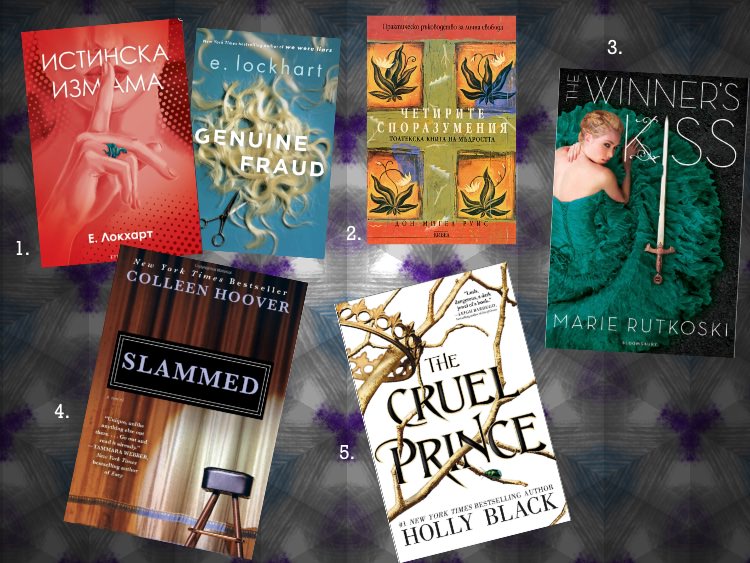 After the massive fail that was my last year’s Goodreads challenge, I decided to renew the series “What I read this month”. I hope it helps me stay up to date with my goal. February was a weak reading month for me because I read The cruel prince and I got the book hangover. So here are the books I read in January and February:

I quite enjoyed the previous E. Lockhart book We were liars. Genuine fraud got a lot of positive feedback and my expectations were high. Sadly, I was disappointed. It’s just that we’ve already read this story, we even watched the movie. The book is well written, but it’s not new. The storyline is dark and twisted. I regret purchasing this book. I won’t tell you which story is copied, but it’s very popular and I can bet you’ve watched the movie.

This book is in many people’s all times favourites list. I wasn’t impressed by The four agreements mainly because I already knew the information from different sources. I understand why it’s so popular and why so many people like it. I just read it too late in life to be that impressed by it.

3. The Winner’s kiss by Marie Rutkoski

Last year I decided not to read fantasy novels (this year I’ll catch up). The Winner’s trilogy was the only exception I made. The Winner’s kiss is the last book in the series. The world is all made up, but there aren’t any fantasy elements in the story. The female protagonist is a very interesting character, she has strong strategical thinking. This series is full of political intrigue and in general is not your typical fantasy.

I’m a fan of Colleen Hoover, but not all of her novels are my cup of tea. Slammed is not published in Bulgarian yet, but Ibis has promised us all Hoover books. There were a few things I didn’t liked about Slammed. The book is mainly targeted towards teenagers. If you are over 25 you probably won’t like it. And this is coming from a person who is currently reading a fairy tale. We’ve read this exact love story many times, I was bored. I liked the fact that the main characters write poetry, but overall Slammed was not my favourite Hoover book. This is my personal opinion.

5. The cruel prince by Holly Black

If you haven’t heard about this book by now, I don’t know where you’ve been. Everybody is talking about The cruel prince by Holly Black. This is the best book about the world of faeries. I have to say that these creatures love their trickery. I really enjoyed the story, I had a book hangover throughout the whole February because of it. I can’t wait to read the next book in the series, but I’ll have to wait a whole year. The main character Jude is a human forced to live in the world of faeries and on top of that in the house of her mother’s murderer. The cruel prince in the story is the youngest son of the king - Cardan. He torments everyone in court just like the school bully. Jude is a complicated character with anger issues, she constantly challenges the prince. All characters are somewhat flawed, it’s just fascinating. The world is described beautifully and the book is a pleasure to read. I hope we can get it in Bulgarian soon.