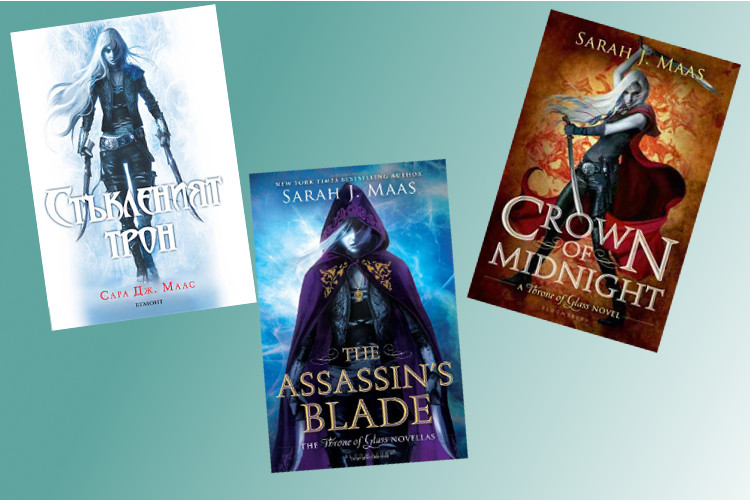 "Throne of glass" by Sarah J. Maas is one of the most raved about books at the moment. People describe it as a mix between "The hunger games" and "Game of thrones". The second book "Crown of midnight" is released too (on May 25 is coming out in Bulgarian). There are going to be six novels in the series. There is another book "The Assassin's blade" which is a prequel to "Throne of glass" and is a bind up of four novellas.

Sarah J. Maas herself describes the story as the story of Cinderella, but if Cinderella was an assassin sent to the ball to kill the prince. "Throne of glass" is indeed a lot like a fairy tale, the brutal scenes from "Game of thrones" are missing. There is a lot of romance in this book which will be appealing to the female readers.

The genre of this novel is fantasy, the world in it is completely made up and has little to do with our reality. The main character Celaena Sardothien is an assassin (something like a professional killer). She is trained to be an assassin since a very young age and at 17 she is notoriously famous. At the beginning of the book she is imprisoned in the salt mines of Endovier after she's been captured a year ago. The king organizes a tournament, every nobleman should present his champion, the winner will become the king's personal assassin. The king's son prince Dorian releases Celaena from the prison in order for her to be his champion in the tournament. The captain of the royal guard Coal must help her prepare.

Celaena arrives in the royal castle, where she must compete with dangerous criminals. At the same time nobody in the court should know her real identity so she pretends to be a courtier. Celaena faces more difficulties when the champions in the tournament start to die under mysterious circumstances. There is a love triangle in this book that is so complicated, you don't have any idea who is going to choose Celaena at the end. I am for the prince!

Celaena is a strong and interesting character. The books are very addicting and the second one is even better that the first. I highly recommend "Throne of glass" if you are a fan of fantasy novels.